On Preference and Buoyancy

This past Monday my son and I took a day off from work to join a couple other parents and their kids on a brief jaunt up I-5 into Washington so that we could swim in Lake Merwin.  The trip was a much welcomed respite from the summer heat that has finally arrived in Portland.  Lake Merwin is beautiful for sure. 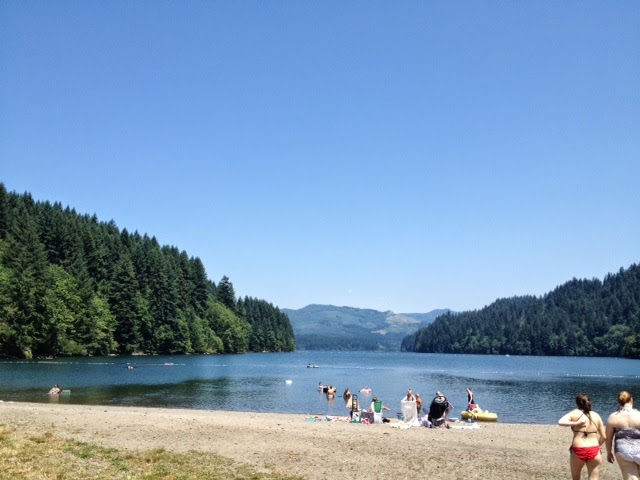 And, having grown up in and around the ocean on the East Coast I have found myself restless to immerse myself in water sans wetsuit (something not very often done in the Pacific Northwest).  We'd suffered through the rain and cold of Portland all winter, not to mention the torment of Facebook posts from our East Coast friends who've been swimming bareback in 70+ degree water for months now.  In short, this was to be some sort of payoff to a psychological setup that I'd been constructing for months.  Going into it I knew that the swimming wouldn't appproximate the memories I have of the warm Atlantic, but the urge toward nostalgia and hope of discovering the joy of lake swimming in the Northwest with my son was too great to resist.

The best part is...the trip to Lake Merwin delivered, though not in all the ways I'd anticipated.  My son had a blast. I did too.  The water was clear and refreshing, though much colder than the Atlantic this time of year.  My son was thrilled to be in lake and to swim to the rope boundary and back.  I was stunned by my own exhilaration generated though witnessing and sharing his joy in the water...excitement that increased exponentially with each stroke he took.  It was shear delight.

My biggest surprise of the day came after our lunch break, as the children in our group were running up and down the rock and sand beach collecting feathers and rocks.  My son came running up to me to show me something.  He clasped five feathers in his right hand and in his left hand was a white object about 4 inches in diameter.  With unbridled delight he handed the white object to me exclaming, "Here, daddy, it's a seashell...my favorite!  Keep it for me to take home."  He then ran off to water to float on a log with his friends. 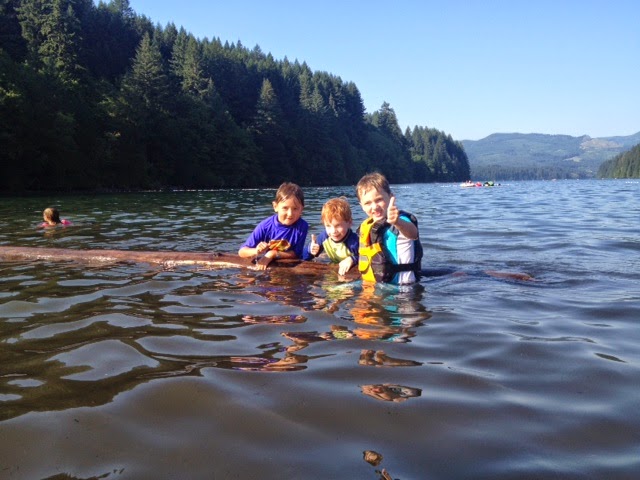 I watched him sprint back to the lake, then studied what he'd handed me.  It was a white piece of plastic, most likely a corner of a shattered cooler that someone had left on the beach.  My heart sank.  The rest of the afternoon, while walking across the beach to the lake, I found myself staring across the sand looking for seashells.  I knew there were none to be found.  I was on a freshwater lake in Washington, far from the coast.

The trip to Lake Merwin was magical for me, as well as for my son, and I hope I always remember our afternoon there.  But, something shifted for me that day.  I realized that, in at least one sense, Portland isn't home.  The saltwater in my veins still runs strong and, that no matter the beauty of lakes and rivers, the ocean still calls me.  The oceans call me to bring my son so he can know their boundless life force, infinitude, and shells with secrets that can't be found on lakes or in cities.

At the end of the day, I finally had to wrangle him in to the lake beach and pack up so that we could drive back down I-5 to Portland.  We stopped for raspberry milkshakes at our favorite Northwest shake and burger joint on the way home.  The kids listened to a CD of The Magic Treehouse as the adults talked.  Things felt OK.  I was grateful for a day away from work with my son, as well as the warmth of summer heat.

I've thought about the broken "shell" that sits on my kitchen counter everyday since.   Oddly, it is affirming.  Maybe because I know that Portland is a "drive in and drive out" for me in this life journey...a lot like the lake trip.  More profoundly, I feel happy that the ocean reached me on that lake in Washington and told me to come home with my son.
Posted by Hill at 5:52 PM