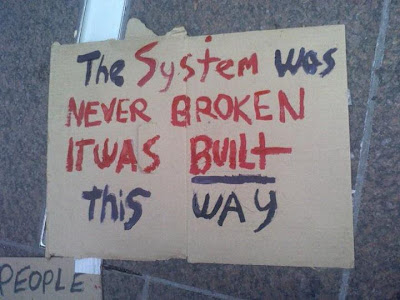 I love the holidays. Yesterday I saw three different people cut off an elderly woman three different times for three different parking spots AND at least two of the perpetrators saw the others ace this woman. The older woman was waiting for a parking spot at a local shopping area in Carrboro, NC. I actually said something to the last person who snaked her and the response (she was a college-age female) was that she was "here" before the woman was. Of course, there was a parking/security guard watching all of this; he intimated to me that his role was to make sure cars did not get broken in to, not to regulate traffic. Now for context, this is a very small lot (maybe 60 spaces) in a small "progressive" town next to Chapel Hill. The stores there are anchored by a local co-op (i.e., Weaver Street), an outdoor shop, and a fusion restaurant that's owned by the co-op's president. I could go on and on about these places and what irks me about them, but I won't. Suffice it to say that this is quite often thought of as a spot where "hippies", "liberals", and "individuals" hang out. From my experience it is local grocery store for wealthy residents of Chapel Hill and Carrboro, as well as a culturally sanitized space for white college kids to try their neo-liberal starter kits out.

For all practical purposes, it's a consumptive space with attendant ethos and consciousness. It's not anti-hegemonic and it's actually quite normative. Everyone gets along if they make purchases, don't feed the birds, and don't dance on the grass (I'm serious about this one). And, I'm not really sure why it's called a co-op, other than "members" occasionally get discounts on wine tastings and baked goods overstock. Shopping for holiday gifts amps the neo-liberal penchant for consumption just like everyone else, only the gifts are "green", expensive, and destroy resources "sustainably". It's still a violent act and attitude.

What would be a peaceable and peaceful alternative? And, how might a consciousness that's different spring to life in place of what we've got? Quite possibly, it has to happen in schools and other institutions (though these are still apparati of the dominate culture)...again, back to my question of "What are we educating for?". Nel Noddings' new book, Peace Education: How We Come to Love and Hate War, is an incisive treatise on the very psychosis that consumer culture gives us. I'd extend her analysis to suggest that this system of relating to others, the world around us, and the environment pretty much sets our consciousness up so that all there is to do is to objectify, consume, and desecrate. Philosophically, epistemologically rather, the frenzy/frustration/panic that makes one snake parking spots, flip drivers the bird (I got that one today too), rape, kill, ignore genocide, and bomb multiple countries simultaneously is the same consciousness that makes the ideological systems of our world function. It also makes us OK with destruction of the environment and the very land base that supports us.

Just some afternoon thoughts and ruminations as I try to figure different ways to be, and to think through what curriculum should be doing. More peaceable attitudes seems like a better inclusion than learning how to cite in APA format or what new ways tablet computing can be using to support digital humanities. Grinch out.
Posted by Hill at 4:29 PM

That was a wonderful piece. I enjoyes reading your insights.